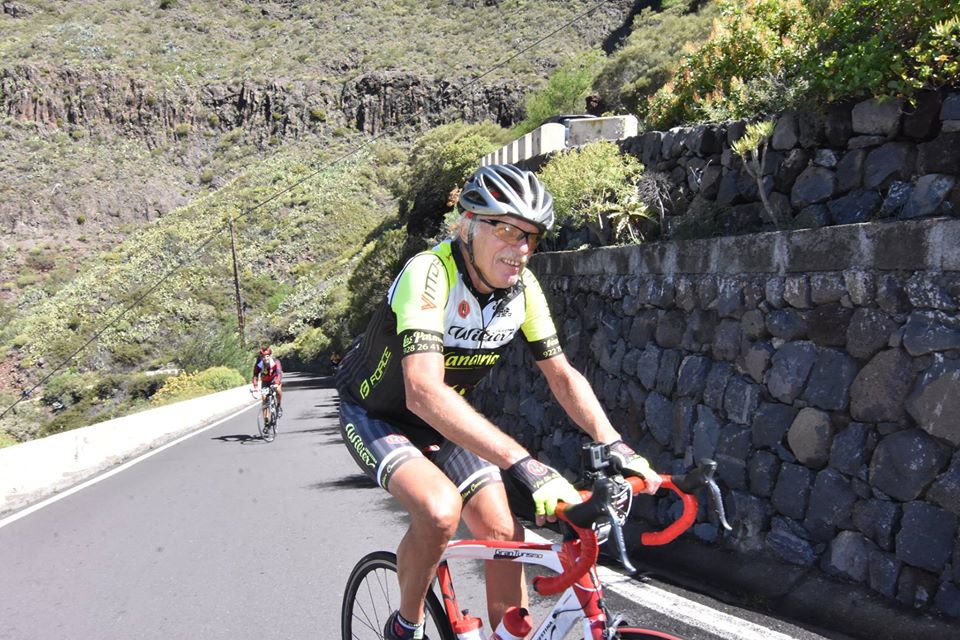 I like cycling and swimming and hiking in the mountains. It is naturally easier in a warmer climate than in Norway where I got tired of moving around and harking and coughing half the year. So then I became a natural climate refugee and out of the 70 countries I have been to on the planet I found that Spain was the most suitable in terms of doing summer sports and at the same time taking a few trips to Norway if necessary.

At first I went to Albir in Costa Blanca in September 2010 to check out the conditions there, but thought it got a bit cold at altitude cycling in November. It was relatively nice to take up swimming again and heavy to swim only 200 m the first few days, but picked it up again and made a few kilometers.

I have been many times in Tenerife on holidays since Easter 1975 when I climbed Pico del Teide (3718 meters above sea level) to check if I could withstand thin air. I started shopping with Tony in Bicisport in 1995 and formally moved to Los Cristianos as a resident in January 2011 and eventually joined the Wilier Canarias C.C. and took part in some races, first one November 3, 2012 up from the Iberostar hotel in Costa Adeja and up the west side to Mirador del Chio in the El Teide plateau.

Swimming was originally meant to be a recreation from cycling, but after a trip to Lanzarote in February 2014 I got a sneech about the "El Rio" swimming crossing in 2.6 km from Lanzarote to La Graciosa. It was first carried out on 18 October 2018. Then it was a truncated Vuelta al Teide cycling race on 30 March 2019 due to 4 cm of snow on the plateau. Then I started to get a little excited about taking part in competitions and was also part of Travesia a Nado Alcaravan on 4 May that year.

Then came the Covid epidemic in February 2020 and put us in a strange situation with a lockdown 7 weeks in the spring of 2020 before we were allowed to cycle and swim again. Fair enough, then there wasn't much else to do but to cut out the "pig parties" and train more which turned out to be a blessing. Covid came and went in waves with different mutants and still does, but exercise seems to be the best medicine and we trained with pleasure and got happy when the suspended events were restarted. On 31 October 2021 I was invited to Murellas del Inferno in Los Gigantes for a short 1,500 m swim and participated in the training community NPC Tenerife which meets regularly in Las Vistas bay near where I live in Los Cristianos. On 11 December we also had a charity gathering in San Juan where the fee was toys for the children at La Palma. 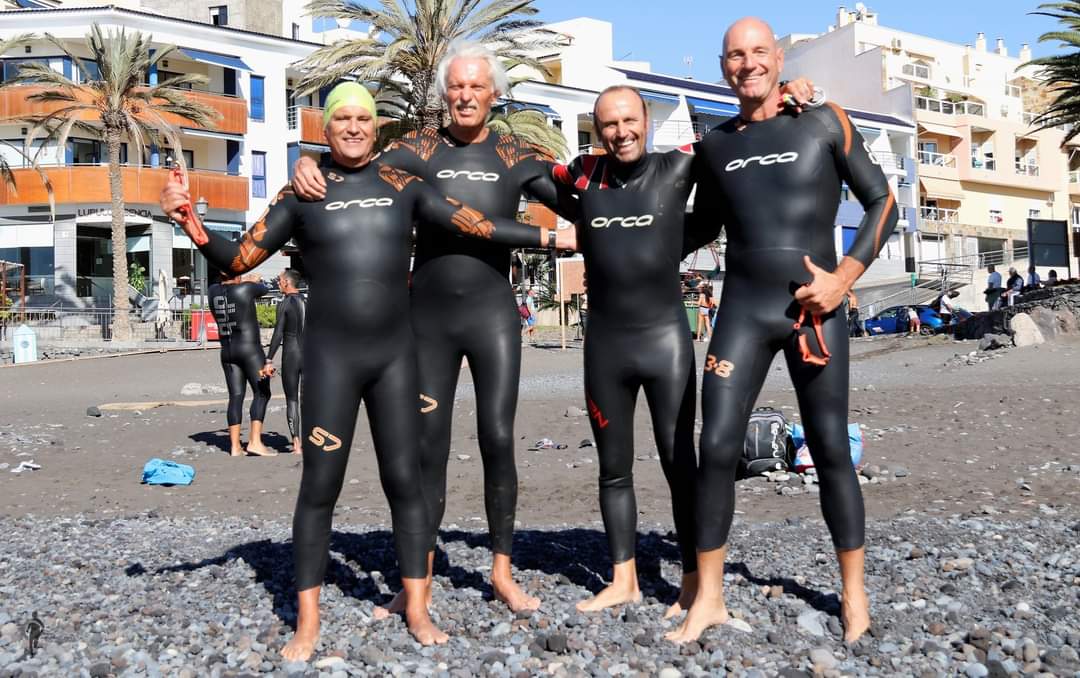 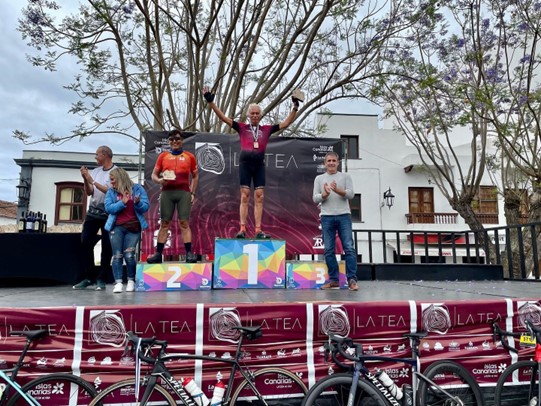 May 8 68 km La Tea Media Gran Fondo at La Palma. Finished at 4:15:54 and 2,175 altitude meters with an average of 16 km/h that held to win the Master 60 class ahead of Francisco Abreu Rodriguez who came in at 4:33:56 and is 72 years old, while I was almost 70. There was no one else in the M60 class, so we were lucky there and got us a place on the podium to storming cheers. Last man one week and first three weeks afterwards, that's Catholic. "The last shall be the first" 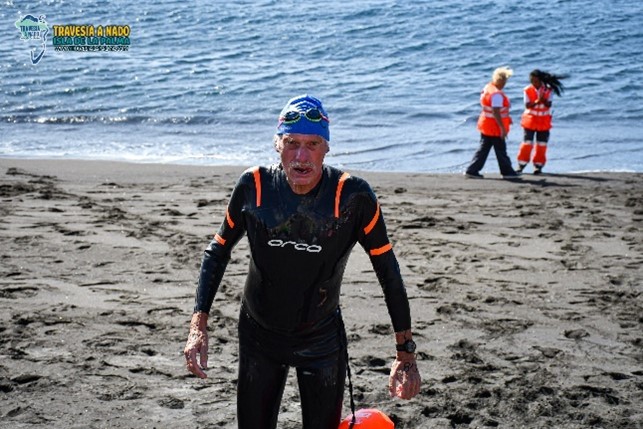 June 4 (4 km) from Travesia a Nado Isla de La Palma was a heavy test with counter current and headwinds all the way and a safety buoy in tow that seemed like a drifter. Got good help from a kayaker to find its way between the waves where it sometimes blew white. 2:24:25 which is an hour behind my prime time, but came within timeout at 2:30:00 and had the honor of being last and oldest here as well. It was spring competitions for the old man. 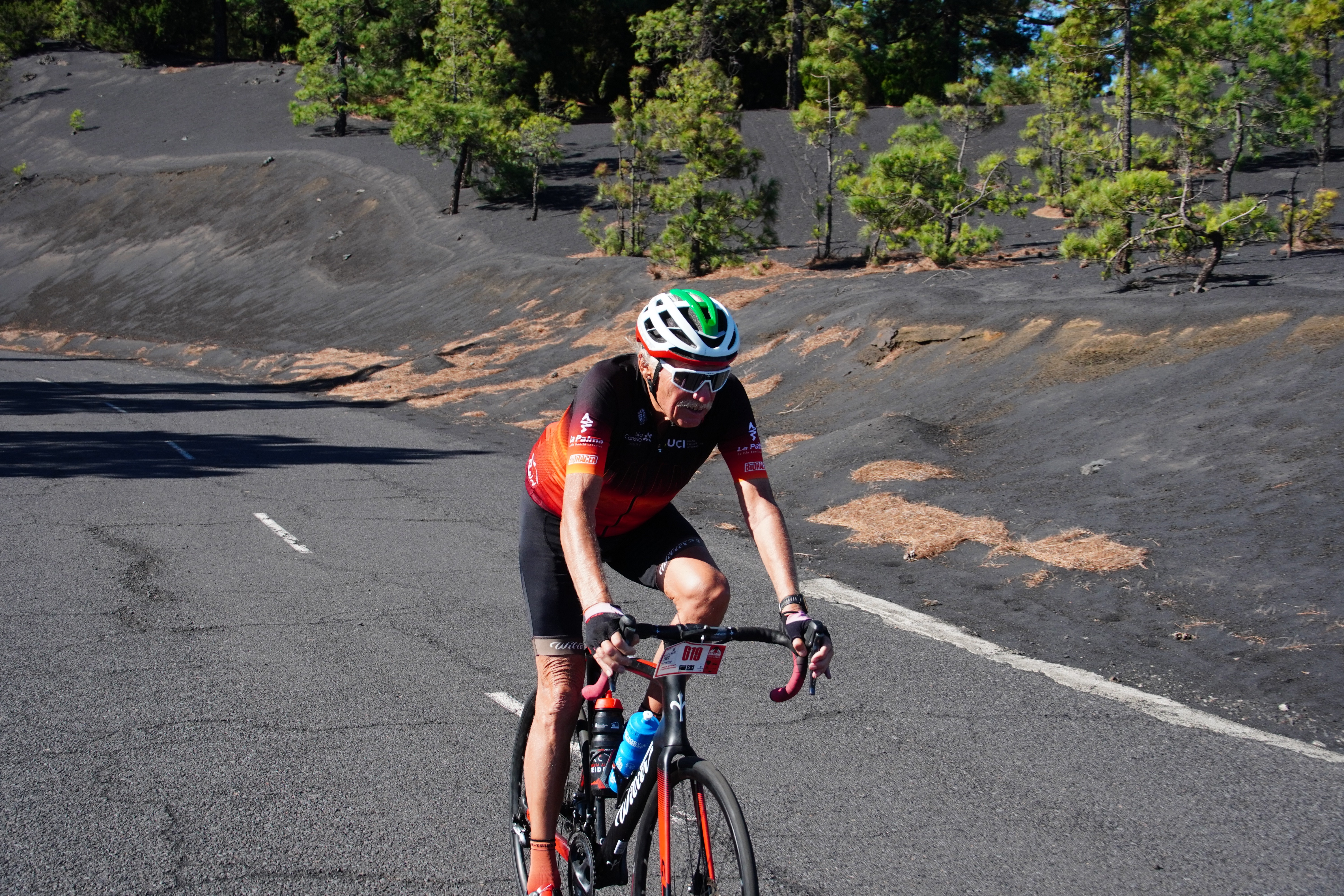 Saturday 20 to 26ºC and 13 km/h northwesterly winds. We rode down to the start at 7:15 a.m. It went as planned at 08:00 for those who were going out on the long ride of 128.3 km and 3,400 meters of altitude gain. The first time mat was in Santa Cruz at the bottom of the first hill at 16:47. Plaza La Glorieta below Mirador Conception 52:57, San Isidro 1:00:42 and then the rough hill up to El Pilar at 2:47:46. There were only ten cyclists who gave up on that hill and David was only 2 minutes ahead of me. A great feed zone there with some nice girls and got water and bananas. Then rolled 12 km the old "volcano road" (pictured above) on the ridge of Cumbre vieja and down to El Paso,Tajyua and La Laguna where Via Nueva went 3.5 km across the new lava to Las Norias with socalled "Roman cover", but it was empty of both cars and gladiators.

David a little ahead of me and up on the new road that was laid between Las Norias and Secadero last fall to be able to evacuate the population through Puerto Naos. That asphalt is still steady and that stretch has an average climb of 9.5%, including one of about a hundred meters with 18% before Secadera, which I walked the bike. Afterwards the road felt comfortable up to the time mat in Las Manchas which were passed in 4:24:05. Then down to Los Canarios where I rode past David and Jose and logged at 5:12:36 where the timeout to cycle down to the Fuencaliente lighthouse was 5 hours at 13:00 for the sake of traffic. The same was true of those behind and 12 in front so we dropped that ride down and up and 15 cyclists got a two hours in "penalty" on the finish time by cycling to the finish, in my case 6:10:21 which turned into 8:10:21. It was about 100 km and 2,600 hm. Got the finisher badge and 6th and last place in the M60+, but not overall...

It was like in May/June special to see the result of the volcanic eruption on September 19 last year on Cumbre Vieja or Volcan de Tajogaite as it is proposed to be called now after a referendum of 4,283 people. The new Via Nueva road over the old LP213 cannot be paved normally yet due to the heat from the lava and normally not allowed to cycle there. It is gradually paved where possible so that those who wish can move back to their original homes, but it will take a long time before the main road LP2 and the mountain road LP212 near the volcano are reopened. In recent days, there have also been some small earthquakes with an epicenter of a few kilometers below the area so one is eagerly awaiting the researchers' investigations. One is prepared for another eruption, but it may come higher up on the Cumbre nueva mountain ridge than last year's and not destroy so much of the infrastructure except for the so-called "volcanic road" on LP302.